Please help support this website by becoming a TrainWeb Patron for just $5 per month. Click here for more info.

History of the Port of Tillamook Bay

Passengers disembark at Salmonberry for a day of fishing on one of the many Anglers Excursions run by the Pacific Railway and Navigation Company in the early years of its operations. No date was provided, but judging by the lack of ballast, this picture must have been taken near the beginning of the PR&N's operation in 1909, before the line was opened to Portland. Power for this special is PR&N 4-4-0 no. 1, an 1872 Baldwin product. Photo courtesy of the Tillamook County Pioneer Museum.

As a railroad, the Port of Tillamook Bay was conceived in 1952 with the intent of developing switching trackage built around the United States Navy's former Tillamook Naval Air Station, just south of Tillamook, Oregon. The railroad connected with the Southern Pacific's Tillamook branch near the hangars.

Like most of the SP's myriad collection of Western Oregon branches, the Tillamook Branch was originaly built by an independant railroad company — in this case, the Pacific Railway and Navigation Company.

At the turn of the century, it was feared that the Harriman-owned SP rival, James Hill of GN fame, was purchasing the Astoria and Columbia River Railroad, which connected Portland to Astoria at the mouth of the Columbia, and Seaside on the coast.

Since fearful rumors could sometimes be more fanciful than practical, it was speculated that Hill intended to use the A&CR as the anchor of a coastal line that would extend all the way down to the Bay Area in California. Harriman commissioned Elmer Lyttle to begin construction on the PR&N, using as much coastal area as practical.

Construction on both ends of the branch began in 1906, and operations began between Tillamook and Salmonberry in 1909. After delays from the depression of 1907, the line was completed by 1911. The first passenger train from Portland arrived on the afternoon of Monday, October 11, 1911. By the time the final spike was driven, the PR&N was a fully visible partner with the SP. In 1915, the line officially passed to SP ownership.

From the beginning, tourism was a major source of revenue on the line. Literature from 1912 touted three passenger trains daily between Tillamook and Mohler (near Batterson), making the trip in an impressive hour and 36 minutes. Throw in a Saturday-Sunday trip departing Portland Union Station, and early freight traffic, and the PR&N was a fairly busy property. Beach resorts sprang up all along the coastal tracks, and the SP was more than happy to tout that its railroad delivered passengers to within a block of the ocean shore.

By 1927, passenger traffic was down to one train daily each way. Train 142, the Tillamook Flyer, departed Tillamook at 7:40 a.m., while companion train 143 whistled out of Reedville (near Hillsboro) at 8:50 a.m., They made the trip in five hours and 35 minutes, quite impressive by modern standards. 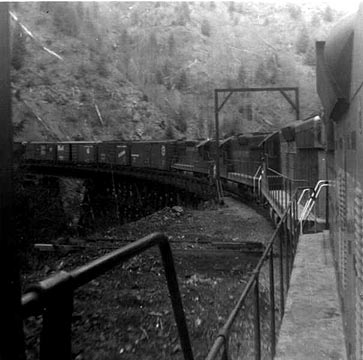 As a Southern Pacific entity, the line was dieselized first with the venerable 70-tonners that were common throughout the SP's branchlines. Later to come were Baldwin AS-616s, and ultimately the SD-7's and SD-9's that would define a great deal of the SP's image, as well as the flavor of the branches themselves.

By 1981, the Port of Tillamook Bay was operating the line from Tillamook to Wheeler, and the brach had been aptly renamed the Wheeler Branch by the SP. At that time, the POTB recieved Southern Pacific SD-9r 4381 on long term lease. Two 80 ton center cab switchers - nos. 110 and 111 - continued to operate the railroad's 5.5 miles in the Industrial Park.

1986 saw the next major change in POTB operations as the railroad began operating on trackage rights over the SP into Hillsboro, Oregon. With that improvement came two more SP SD-9's - the 4368 and 4414. Incredibly, somewhere in that time frame, the 4381 was repainted into the "Kodachrome" paint scheme of the failed Southern Pacific-Santa Fe merger.

Maintenance of the branch has always been a serious concern. With an average yearly rainfall of 89.81 inches*, washouts, slides and other problems are commonplace. Wanting to wash itself of the headache, the Southern Pacific applied to abandon the line in 1989. In response, the Port of Tillamook Bay and the State of Oregon purchased the entire line to Schefflin, and the present-day Port of Tillamook Bay was born. 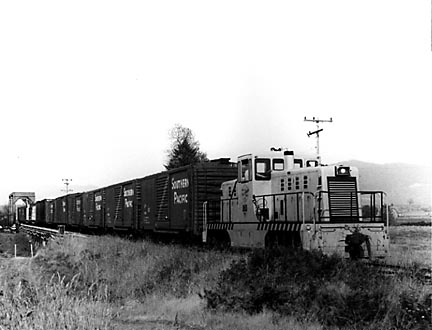 Freight traffic on the branch is as it always was - mainly lumber products from mills in Tillamook, Garibaldi, Wheeler and Banks. The line has grown such that another three SD-9's - the 4405, 4406 and 4432 have been purchased, along with GP-9's 3771 and 101. The latter is the only non-SP locomotive owned by the railroad. And, despite the fact that traffic is still lagging from the line's all-time high, there has been a significant increase in the last ten years.

As with its predicessors, the modern day POTB sees not only freight movements, but a host of passenger excursions and other trains. In the past, the Spirit of Oregon operated nightly dinner trains out of Roy, and excursions have been offered from Tillamook to the Blimp Hangars, and down to Garibaldi and Wheeler.

Nowadays, the cow-painted 101 or a newly aquired RDC (Rail Diesel Car) are used to run summer excursions along the coast. Track upgrades throughout the 2000 summer season may widen that running area.

The POTB is also a victim of the SP's deferred maintenance. For who knows how long, the line was maintained on an as-needed-to-keep-things-running basis. Most of the track is now restricted to 10 mph or worse, with long stretches of FRA Excepted status track. Work is slowly being done on rehabilitating the tired right of way, but financial constraints have kept that work from being done in a timely manner.

The future for the POTB is somewhat clouded. Keeping the line financialy viable, let alone open is a logistical nightmare. The railroad recently signed a 20 year deal to lease the line from Banks to Schefflin to the Portland and Western, as a link between the Astoria line and the south side of Portland.

The POTB's fleet of SD-9's is tiring out, but still reliable enough to keep running. (Although a two-person shop crew is kept plenty busy resuscitating units). Still, it looks like the 567 motor is here to stay —for now. Even after losing the 4381, and having the 4405 sidelined, the railroad is reportedly still shopping in the SD-9 market.

Sometime in the future, no doubt, the SD-9's will fall by the wayside, replaced by SD40-2's or some other of the second generation units that are flooding into the market, deemed obsolete after being replaced by newer SD-90s and Dash-9’s. When that day comes, the image of the Southern Pacific, and a great deal of the POTB's personality will be lost as well, and the whine of turbocharged 645's will drown out the gost of the SP.

* Average rainfall according to 1948-1998 data compiled by the National Weather Service.
Other information was gained from Edwin Culp's book "Stations West", and from the Oregon Historical Society. The author would also like to thank the Tillamook County Pioneer Museum for its assistance, and the gracious lending of the photo. I look forward to adding more historical photos in the future..