Please help support this website by becoming a TrainWeb Patron for just $5 per month. Click here for more info. 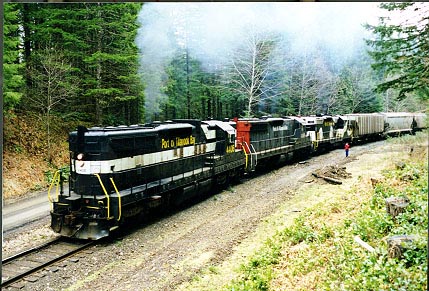 Operations on the port of Tillamook Bay seem to follow the same basic structure as the line itself. Though I have tried to keep this as accurate as practical, please note that this is intended to give an overview of typical operations, and may not reflect the acutal current operating schedule. Also, and I must stress this completely, it is subject to change, and when you are out railfanning, hiking, or exploring near the right of way you should ALWAYS EXPECT A TRAIN. Be safe, not sorry.

On Sunday-Tuesday-Thursday, the hill "Freight" train hauls empties west from Banks to Batterson. On Monday-Wednesday-Friday, the schedule is reversed, and the train makes its way back east with loads. This job usualy rates three or four of the SD's, depending on availability, but sometimes the geeps fill in. Lately, the trains have been using four SD-9's with a great deal of success. Shipments are at an all time high, and yet the railroad is running about as efficiently as is ever has.

There are very few online shippers on the hill. The railroad picks up cars from the P&W in Banks, and switches Banks Lumber Co in Banks before tying up. Call time both directions is around 4 a.m., but the train rarely moves before 5:30-6:00 a.m. because the crew comes on duty in Tillamook, and must drive to its destination, start the power and perform an air test.

On the coast, the "Switcher" train runs from Tillamook to Batterson on Sunday, Tuesday and Thursday, the idea being that the train, with loads from the mills in Tillamook and Garibaldi, will meet the freight at Batterson. After doing some switching in Batterson, the switch crew will trade their power for the freight power and take the loads up to Salmonberry, where the train is tied up for the night.

On Monday, Wednesday and Friday, the train heads back west from Batterson with the empties brought in the previous day, and switches in Tillamook.

The train is usualy about 16-35 cars long, and is handled by two locomotives, a GP-9 and one of the available SD-9's, although additional power may be used if necessary. The train crew for this job usualy goes on duty at 8 a.m., and can be expected to be on the road by 10:00. Many days, this crew will usually have to relieve the Hill train crew when it dies on hours, and complete the interchange in Banks.

Westbound, it is usually necessary to double the train up the steep 2.9-3.1 percent grades. If this has to be done, the cars are left on the main where the train stalls, which is usually somewhere between mp 808.5 and mp 806, and the balance is taken to Cochran. Doubling the train usualy adds another 2-3 hours to an already long trip.

Other operations include passenger excursions using RDC 553 and/or Curtiss Lumber Co. steamer no. 2. This summer, those trains ran on the coastal part of the line. Infrequent log extras are also run, as are regular work trains. Those trains are generally worth a GP-9, or whatever is leftover. In most cases, this train works out of Buxton, departing around 07:00. As of late, the Port is also running a number of ballast trains to dump rock on the west side of the line. Those trains usually use an SD-9 to pull the Port's three ballast hoppers.

Questions or Comments?
E-mail me at potb101@netscape.net