The "overviews" give each train dispatcher a schematic view of his section of the railroad. Both track and train symbols are color coded to denote current status. 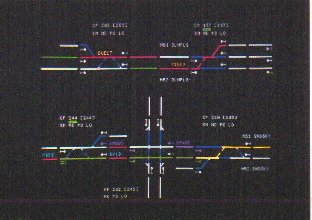 Each train dispatcher has a 13" color monitor to display the control points available on his/her territory. 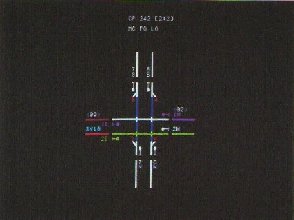 Pictured above is CP-242, a control point on Conrail's Chicago Line at Sandusky, Ohio. Here, an eastbound train, SV-10 indicated in blue, is appoaching the CP. The train dispatcher has signal 2E cleared as indicated by the green trace over the crossing diamonds. The derails on the north-south tracks are applied and locked as indicated by the numbers 4 and 5 in red. Switches are indicated in the same manner.

The Avtec Access Communication System is a 240-line, computer controlled communications switch system. Up to 19 individual train dispatchers can use the touch screen terminals to communicate with trains by radio, various wayside locations or other Conrail or foreign railroad dispatchers at any given time, either by PBC telephone or dedicated private lines. The system's computer allows versatility in configuring lines on an as needed basis. 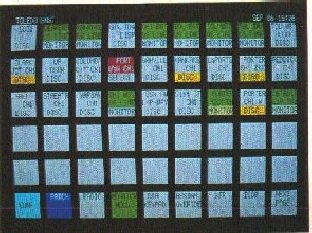 The other controls beneath the touch screen monitor allow for headset and mike connection to minimize ambient noise while operating. The color attributes on the touch screen allow for quick and easy interpretation of a station's condition. When a station "cell" is red, it is in the "select" mode, with green indicating the station is in "monitor" and is heard over the train dispatcher's monitor speaker. The light and dark blue patch and conference functions provide versatility in connecting various stations together to save time in transferring vital information thus improving accuracy and efficiency. 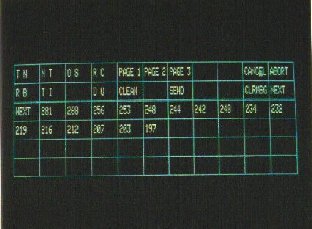 The touch screen is a terminal that uses infrared beam technology to detect operator input for a variety of operations. The train dispatcher uses the touch screen to control switches and signals, to monitor train information and to access other territory controls including: TN, display of all trains on computer systems; OS, display of trains active and inactive by control points; and RB, display of blocking devices applied to the controls of the touch screen for the sole movement of trains. Blocking devices are used to prevent the movement of trains by signal indication over track occupied by maintenance forces or equipment.

One menu option of the touch screen is used to access control points on a dispatcher's territory. Once a control point (CP) is selected, a menu of available switches and signal for that requested CP will appear on the screen. 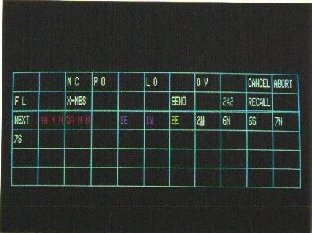 Pictured is the request grid associated with CP-242. Here, 2E signal is displayed, indicated in green, and 3,4, and 5 switches are lined and locked in the normal position, indicated in red. In addition, track blocking has been applied to 1E and 1W signals, indicated in magenta.

The Transportation Management System monitors the movement and activity of trains on a current basis. The system also provides historical records and performance analysis in screen display or hard copy formats and it interacts with other reporting systems such as RMS (Resource Management System) and the LDS (Locomotive Distribution System). 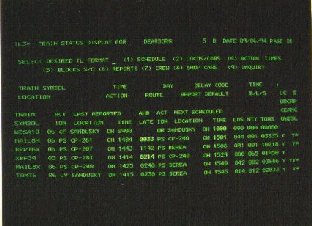 The primary menu for TMS is the "TL3" screen. From this screen, a dispatcher can move directly to any of the many applications of the system. 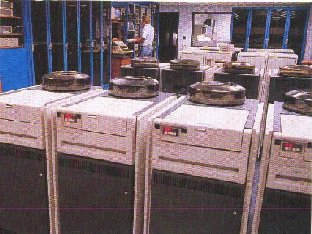 This is the heart of the CATDF. The computer room houses the normal and standby host computers, plus all associated code line/office emulators and display generators for operations and safe train movement. The room also houses active monitoring and diagnostic equipment to maintain good communication between the train dispatcher and control points.

This page is dedicated to the men and women who
work at Conrail's CATD facility in Selkirk, NY.

Return to the homepage of Trains-R-Us